Shopping Cart
Your Cart is Empty
Quantity:
Subtotal
Taxes
Shipping
Total
There was an error with PayPalClick here to try again

Thank you for your business!You should be receiving an order confirmation from Paypal shortly.Exit Shopping Cart

Being Twice the Mother Does not Make You a Father! 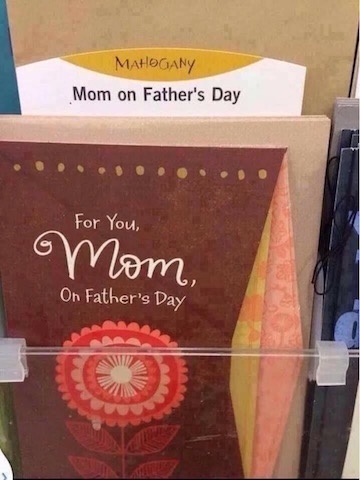 THE HALLMARK PROBLEM
Let me begin this conversation by stating that a single mother raised me and that I have a great relationship with my father even though, for reasons beyond my control, he could not be an everyday presence in my life growing up. I was deeply affected by his absence and have had to work through my own issues as I struggle to be the best husband and father possible. I love my Mom and believe that she had to be twice the mother, than was to be expected, due to our circumstances. In my opinion, being twice the mother is extremely honorable and should definitely be celebrated, however, it does not make you a father. I often walk through the greeting card section of various stores around Father’s Day to see how big the display will be or if the card aisle is nearly empty the way it is when I am trying to find a card on Mother’s Day. Usually, I have my pick of cards because the aisles are still well stocked even though the selection is considerably smaller. This year as I perused the aisle I came across a card that instantly infuriated me. After carefully looking it over I realized my issue with this card was deeper than the sentiment behind it but also the incorrect and incomplete narrative it perpetuates about fatherhood, motherhood and the value of black life. (Disclaimer: After visiting their website I did find that Hallmark discontinued the printing and shipping of the card in 2014. The card I saw must have admittedly been a straggler. Here is a link to their corporate statement.
MOTHERHOOD IS EXCEPTIONAL
I want to begin by pointing out that as the product of a single mother I believe motherhood should be celebrated. Our mother's are the holders and nurturers of life. Even for women who may never experience childbirth (I would like to say I see you) the ability to nurture and sustain life is a gift available for any woman who takes up the mantle. As the product of a single mother and a bit of a Momma’s boy, I would like to say that I believe motherhood should be celebrated, however it is also often idolized. As a society, we have fallen prey to the notion that fathers are expendable and then continue to wonder why many fathers are living into the expectations. I often do a training activity where individuals get in a circle and place labels on the foreheads of others in the circle. The group is asked to plan a community barbecue while treating one another as the label on their head. Some labels are perceived positively and others negatively. What happens is usually one of two responses either the individual completely rebels against the label and continues to participate fully in the planning or they live into the label and participate only as much is expected.Sometimes they even leave the group in frustration. Real life labels are no different; people will either rebel or most likely live into them. Mothers are celebrated, as they should be, and are given the label of exceptionality however, even on the day set aside to celebrate them, fathers can often feel labeled as expendable.
FATHERHOOD IS EXPENDABLE
The absence of a father and the effect it has on children has been well documented. Statistics show that a child who is raised without a father is more likely to end up in a marginal society role and to struggle as an adult. According to the US Census Bureau, children in father-absent homes are almost four times more likely to be poor. Many men who have grown up without fathers find themselves passionately trying to break the cycle for their families because they know that fatherhood is not expendable. The sentiment this card shares is no help to a father battling the uncertainty, insecurity and fear of trying to do something he never saw modeled. It reinforces for him that even if he gives up and walks away everything will be fine because Mom can just fill his role. I don’t believe mothers truly believe this but the narrative is still perpetuated. Once again, let me say that being twice the mother is honorable and necessary but it does not make you a father. Rather than slighting all of the fathers and father figures who are involved in children's lives by taking the one day set aside for fathers to celebrate mother’s again, we should be celebrating the uncles, brothers, grandfathers, stepfathers, godfathers mentors, teachers and other father figures that have stepped up in the absence of biological fathers. As a majority African American church, this is how Canaan decided to celebrate the fathers and father figures in our community; we would never accentuate negative family aspects on a day to celebrate, to us that is a form of exploitation. 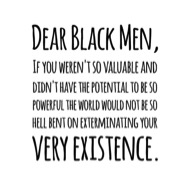